Following is a short essay by John Fitzhugh Millar about one of Elizabeth Wilbraham’s buildings, the Guildhall or Town Hall at Windsor where The Prince of Wales and The Duchess of Cornwall were married.

A period painting of the hall shows that it once had arches where now it has columns. In the story, John Millar advocates for authorities to plan to restore that part of the building to its original appearance, which would involve a lot of jumping through hoops because it is indeed a Grade I listed building. 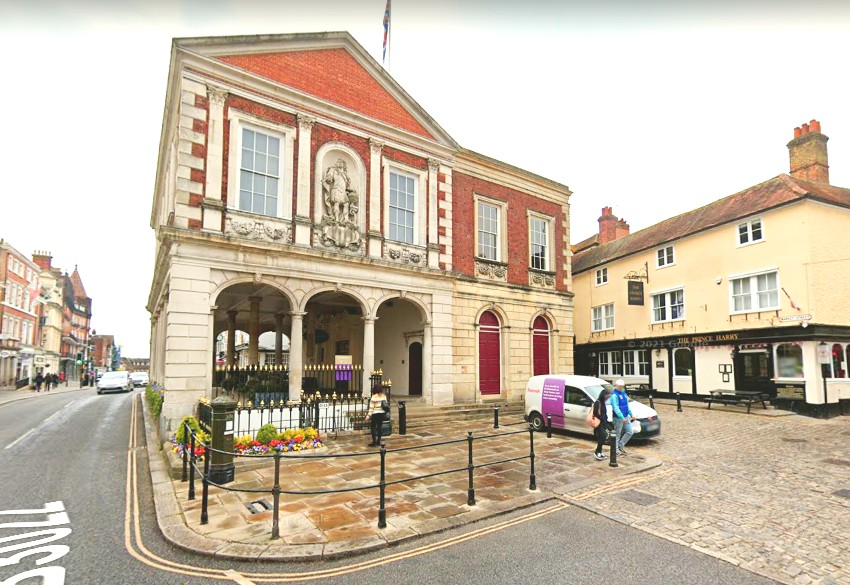 An Essay by John Fitzhugh Millar

When I was a fourteen-year-old student over sixty years ago at the famous Charterhouse School at Godalming, Surrey, I stumbled across the work of a mystery architect who designed in the style of Christopher Wren. With help from leading British architectural historians John Cornforth and Giles Worsley, I found that the mystery architect was Elizabeth Mytton, Lady Thomas Wilbraham (1632-1705) – the world’s first woman architect. If she had been a man, she would be more famous than Christopher Wren, who was in fact her star student. Elizabeth had been trained in quick succession during her extended honeymoon at age nineteen by Pieter Post in Amsterdam, Baldassare Longhena in Venice, and Gian-Lorenzo Bernini in Rome, and on her trip to Italy she stopped to be greatly influenced by the 1536 Italian-designed Stadtresidenz at Landshut, Germany.

She had been told by everyone that it was illegal under English law for women to practice architecture, so she was very careful not to leave behind any piece of documentary paper that could serve to convict her. That is why she is so little known today, and many of her buildings are falsely attributed to others. As it happened, there was no such statute on the books outlawing women as architects, but because everyone thought there was, it had just the same effect as if it were true. 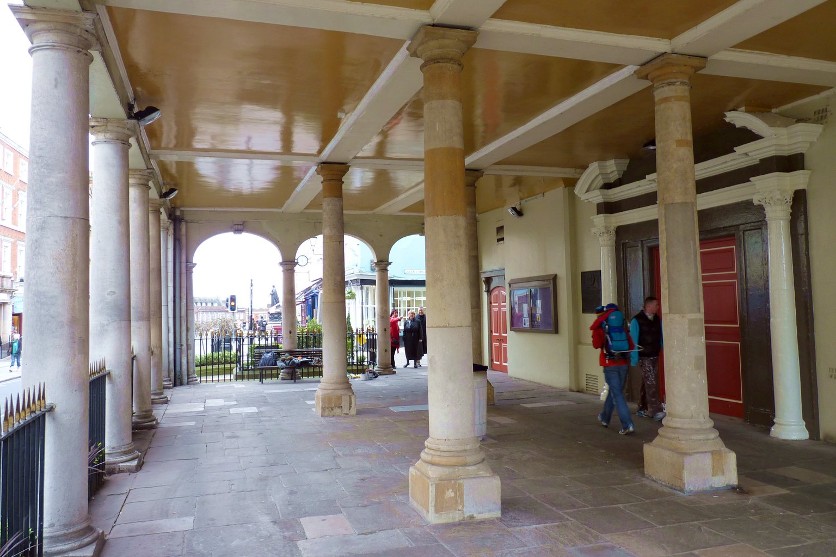 She managed to be asked by Charles II to design a number of important buildings, including the 1662 addition to Somerset House for Charles’ mother, the French-born Henriette-Marie, and that building contained the first ever sash windows in the British Isles, which means that she introduced the sash window to Britain, although no one really knows in which country it originated. It also had England’s first Italian-style chimneys, which is proof that its designer had visited Italy and Landshut.

One of the many public buildings that Elizabeth Wilbraham was asked to design in the 1680s was the Guildhall at Windsor. The intention was that the ground floor of the building should serve as the area’s produce market, surrounded by an elegant arcade, as shown in an early painting (much later, the arches were replaced by columns that look rather out of place). The large room upstairs over the market was a multi-purpose room, where the town council could meet, and where the courts could hold sessions, and where English Country Dance assemblies and concerts or even small theatrical plays could be held. Wilbraham apparently calculated carefully how strong the floor timbers needed to be in order to support the upstairs room for any conceivable activities to be held there. 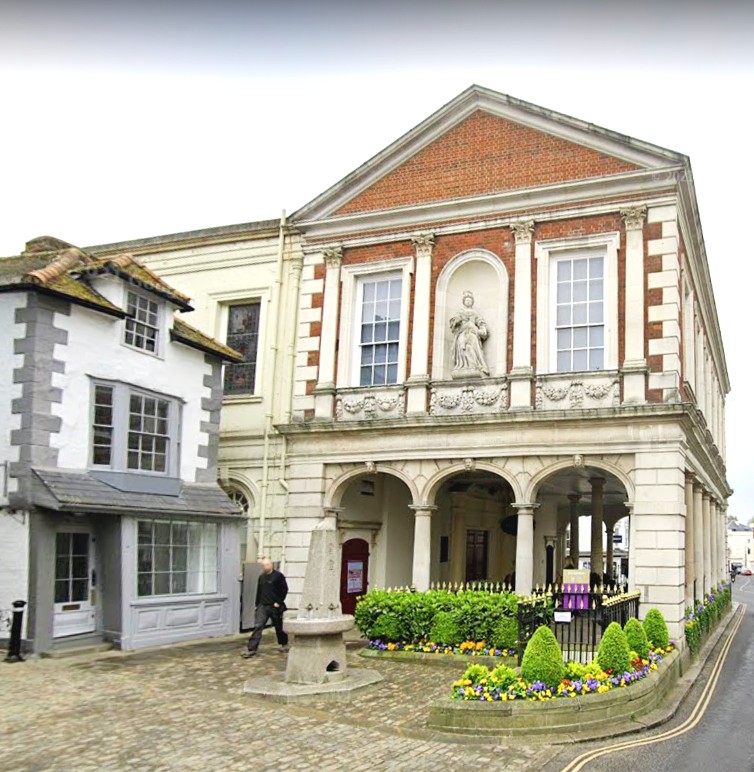 Since Wilbraham could not be seen to be supervising construction, she arranged to place in overall charge of the project Sir Thomas Fitch of London, whom she had engaged on several previous occasions (and she in turn had designed a handsome mansion for him on the Thames, not far from the outflow of the River Fleet). Most people believed that Fitch had been the architect of the building, because he had been the one to present Elizabeth’s plans to the city authorities.

Construction began in 1687. When Fitch unfortunately died in 1689, the building was approximately 95% complete. However, the city fathers panicked when they learned of Fitch’s death. They approached Sir Christopher Wren and told him that since he had been born in Windsor he owed it to the city to see the construction through to the end.

Wren was rather annoyed, and pointed out that the workmen all knew what they were supposed to do in order to finish it; that he knew the architect well and had complete confidence in the architect’s abilities. Then it transpired that the city fathers were actually terrified lest the upper room crash through down into the market, and all of the platitudes that Wren could muster would not assuage them. They ordered him to place eight columns in the market under the middle of the upper room, so he did just as they demanded; the cost of the columns was met by omitting the planned cupola that would have contained a public clock and a bell.

However, in the nineteenth century, workmen were hired to paint the columns. One of the painters, standing near the top of his ladder, is reported to have exclaimed, “’ere! Look at this! There’s a two-inch gap between the tops of the columns and the underside of the upper room!” Of course, as soon as they learned about the gaps, the authorities ordered the gaps to be filled in with wedges and tiles, which is how matters stand today.

So, Wren and Wilbraham had the last laugh, although of course they were no longeralive to watch the punch-line unfold.

Alas, the original building with its arcade was a lot more attractive than the present building with is columns all around, but since it is a Grade-I Listed Building it is doubtful that permission could ever be obtained to return it to the original appearance as laid out in a period painting. HRH Prince Charles married Camilla in the building in 2005. Could it be possible that the architecturally sensitive Prince of Wales could be persuaded to lend his authority towards a complete restoration?